THE HEROES WHO TOOK HEALTH CANADA TO TASK

Below is a video of Canadian lawyer Shawn Buckley** LLB. He was the man hired to take on the case of Truehope Nutritional Products vs. Health Canada.  Truehope had been raided by Health Canada in 2003 for selling a nutritional product that had (at that time) helped over 3,000 people successfully come off  psychiatric drugs.   Some had been diagnosed and labelled with ‘mental disorders’, some just hooked on one kind of psychiatric drug or another and  trying to get off.

Most of these people had gone the conventional route  to handling their troubles by seeing a psychiatrist or doctor and were prescribed anti-psychotic or SSRI Medications but felt that this treatment wasn’t doing anything for them.  Quite the opposite in many cases.

Health Canada prohibited Truehope from bringing their product in from the United States (where it was manufactured)  and when this occurred, many people who were taking these supplements became very ill again, some of them completing suicide.

My hat’s off to you Shawn Buckley and Truehope.

Here is the video:

I have on numerous occasions, had the very good fortune of spending time with  Tony (co-founder of Truehope) & Barbara Stephen.  They have both lived the nightmare of having close personal relationships with people labelled mentally ill (bi-polar) and on some pretty heavy medications.  They are two of the most generous, down to earth, loving people I have ever met.  Two very big hearts who have made it their personal mission to help others get off these insidious drugs.

For the record,  to date,  Truehope has successfully helped over 80,000 people come safely and effectively off their medications and they continue to do so.

**Shawn Buckley is a constitutional and criminal lawyer with expertise in the Food and Drugs Act and Regulations. He is president of Canada’s Natural Health Products Protection Association (NHPPA), a non-profit organization devoted to protecting Canadians’ access to natural health products. In 2010, the NHPPA launched its Three Part Action Plan to focus attention on Canadians’ constitutional rights. This plan includes the Charter of Health Freedom (www.charterofhealthfreedom.org).

Lawdy, lawdy…. what do we have heeyah!!  I was all set to write two completely separate posts but found, eerily enough, that the information  I had gathered was  in fact,  somehow connected.  So I thought I’d  just clump em’ both together.  You’ll see what I mean in a minute.

First of all, I had my attention half way around the world,  knickers all in a knot regarding  a Draft Mental Health Bill 2011 , written by The Western Australia Mental Health Commission (MHC) and having just been brought before the WA (Western Australia) Legislature.  Click here for the MHC Draft Mental Health Bill for Dummies.  One of the most alarming pieces of work I’ve ever come across.   This bill  was overseen by  the Mental Health Commissioner and clinical psychologist, Mr Eddie Bartnik.   Well, you’ll never guess (some of you will)  who  Mr. Bartnik is connected up with way over yonder?  None other than the renowned “Australian of the Year” awardee, Dr. Patrick McGorry.  See here.  Why doesn’t that surprise me?  Birds of a feather and all that.

If you’ve never heard of him, Patrick McGorry is the Psychiatrist who came up with the EARLY INTERVENTION idea, which premise is based on identifying and treating psychosis in its early stages to prevent patients developing full-blown psychotic illnesses – from the womb up no less.  I couldn’t make this stuff up.  Yeah Paddy, like there’s an actual scientific means to do that.  Don’t get me started.   (Even Allen Frances, who chaired the committee that produced the current diagnostic bible for psychiatry, the DSM-IV, has warned that Professor McGorry’s Early Psychosis Intervention Centres do not have a reliable early diagnosis tool).

Okay, so there’s this Bill in the works in Australia.  But there’s also something  I’ve stumbled upon that is eerily similar, something that’s happening right in our own back yard.

Take a look at this.  This was passed on to me from a concerned substitute teacher here in Toronto (my knickers were choking me now). It’s a flyer that the school is giving to kids that are having problems.  I’m concerned. 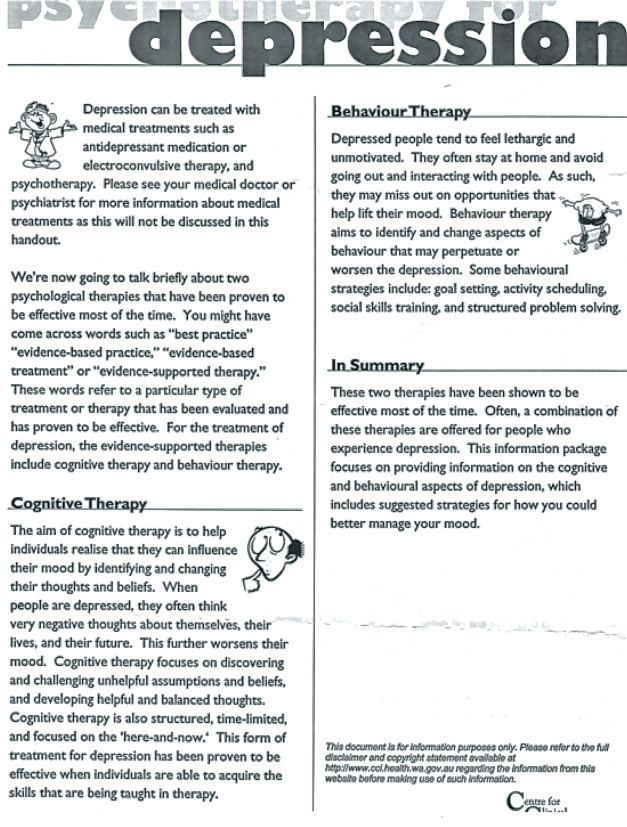 NOTICE THE “TREATMENT” BEING OFFERED (Top left of flyer): 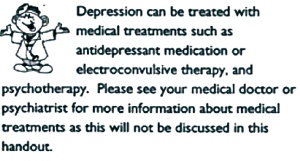 Would you want this medical treatment offered to your 13-year-old son or daughter?  Would you even consider permitting your child to receive E.C.T.  – never mind the antidepressant medication? Just wanted to bring the point home.

Anyway, I received this “flyer” in the condition it’s in.  Sorry about that.  But do you see in the lower right hand corner?  I’ve tracked this flyer down.  It’s from the Centre for Clinical Intervention and it comes from the Government of Australia.  Go to Module 1, Page 7.

It appears that this was called “Back from the Blues”  but they changed it and added some innocuous doctor caricatures for the kids.  Makes recommending ECT to a teener more tame I guess.  Makes me all warm and fuzzy inside.  Is it in all Toronto high schools?   Is it in that school?  You know the one, right around the corner.

How did this document from the Government of W. Australia’s Centre for Clinical Intervention end up in a high school in Toronto?  And if we are adopting their “Mental Health” initiatives, is it so far-fetched, so “out there” to believe that if that Bill is passed in Australia, that Canada won’t follow suit?  Is it that far a stretch really?